This post is the highlight coverage of week two of the 2018 Drawbridge Blood Bowl League. This link has the full current standings . Don’t forget you can also view the League Rules and check out the Endorsements page, and catch up on all the action from week one here. 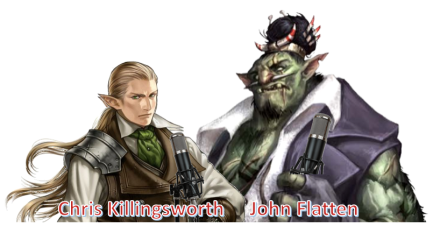 Chris Killingsworth: Well John, we’re back again after another week packed to the gills with exciting Blood Bowl action.

John Flatten: That’s right Chris. We’ve had some thrills, spills, and kills this week. Plus ample actual fish gills because the Dark Elves brought a boat deck to play on.

Chris: Let’s get right into the week’s Power Rankings. While the Green-Grey Plaguers and Honest to Gob continue to lead the East and West divisions respectively, there’s a lot of rising teams that are starting to get hot.

John: Let’s hope they’re not too hot. Remember that use of fire, napalm, and burning oil was banned six years ago from the League for being too lethal.

Chris: Players were tougher back in our day, John. The occasional pot of boiling oil was the cost of doing business.

John: Speaking of business, let’s talk about a team that’s in the business of scoring touchdowns: the Leadbelching Manglers. This West Division team won its opening match against the Orcland Stompas, in large part with the classic “Goblin Toss” special play. The Troll picked up the goblin who had the ball, refrained from eating him, managed to throw him, and the goblin actually landed on his feet.

Chris: That’s a heck of a good play. Check out the telestrator: getting that Gobbo up well past the Stompas’ line made a real difference, and took the Manglers to a lead they would keep the rest of the game.

John: Yeah, with play like that, the Manglers are likely to be a nasty team to face. It’s one thing to face Orc muscle and armor, entirely another when they’re able to score on you.

Chris: Hold up John, let’s quick take a moment to talk about the next advertisement campaign from Hike, manufacturers of of the finest athletic boots for Blood Bowl Competition.

John: That’s right, Chris. Not only are Hike shoes the choice of Finn the Fierce, star Trollslayer of the Fort Tyr Miners, but they’re also apparently socially conscious now days.

Chris: Odd. I thought they were stitched together in a sweatshop that uses underpaid halfling laborers. But what do I know? At least the pair of boots looked good when Finn used them to kick in the teeth of a Goblin Fanatic in his last outing.

John: That’s right, the leather of every Hike boot is bloodstain-resistant.

Chris: Speaking of blood stains, let’s get to our next power ranking. I think teams really need to watch out for the Clar Karond Krakens. They’ve suffered some losses in their first few games, including some serious injuries to their players. Yet they won their most recent bout, and they’re looking tougher and tougher as a team.

John: Sometimes it takes a bit of adversity to really get a team going, Chris.

Chris: Tell that to Da Noo Orleans Scents… their mass poisoning should put them over the top then!

John: Except they’re all dead.

Chris: Speaking of the dead, I think it’s time we talk about our third power ranking this week. They’re a rising team to watch: the Karak Zorn Zealous Zoomers.

Chris: They may have lost, John, but I think they’ve got a key advantage to watch out for. Their coach went and sprung for a Deathroller.

John: I thought I smelled the aroma of fuel mixed with beer when I was standing outside the arena!

Chris: Exactly. That beer-steam-driven-machine is poised to wreck some players’ days. While they haven’t won yet, I still think the Zoomers are a team to watch in the coming weeks. When opponents start turning up in the casualty box covered in spiked tread marks, that opens the door to a few rushing touchdowns right quick.

John: And speaking of quick, that’s our power rankings for the week. Stay tuned for next week’s coverage. And remember: it’s not Blood Bowl till a fan throws a bottle at the pitch.