So this past weekend I attended the America’s Team Championship (ATC), playing with great players from my local meta of Pittsburgh. Our team, The Terminus and Friends Variety Hour (named that way because the only caster we were sure would be included for a long time was Terminus), managed to finish in 8th place overall with a 3-2 record as a team. We had some tough matches to be sure, playing our round 3 against the team that won it all (Top of 2 Grab a Brew) from California, and our round 4 against the team that finished 4th overall. You can check out the rounds and standings here and you can find our lists at the Conflict Chamber site. My own performance was not what I hoped it would be. I’m proud of two games: my first game was a solid win against a Haley3 list that I played a good game on, and my third game against Brandon Owens’ Siege2 list from the ATC-winning team ended in a 5 to 7 points spread in his favor at the end of seven rounds. He was ahead in attrition, but I scored first and managed to push it to seven (even while my forces dwindled due to his far better play). The other three games I made some key errors that cost me each game. So 1-1 I’m happy with, but there’s a distinct 0-3 I know I can improve.

Some more ruminations on the ATC are yet to come, but first painting as always… though maybe I need to revise that. I ended up playing Convergence of Cyriss at the ATC because I felt I could get it fully painted in time as a primary reason. And I think I need to put practice and familiarity ahead of painting completion to raise my competitive play level. So yeah, I’ll still list my painting as what I’m most proud of with these in future posts. And I’m doing the 365 points painted in a year challenge again. But expect a bit more acceptance of playing unpainted (and more focus on a single faction, but that’s for the next blog post). Anyhow, on to what I completed for the event: 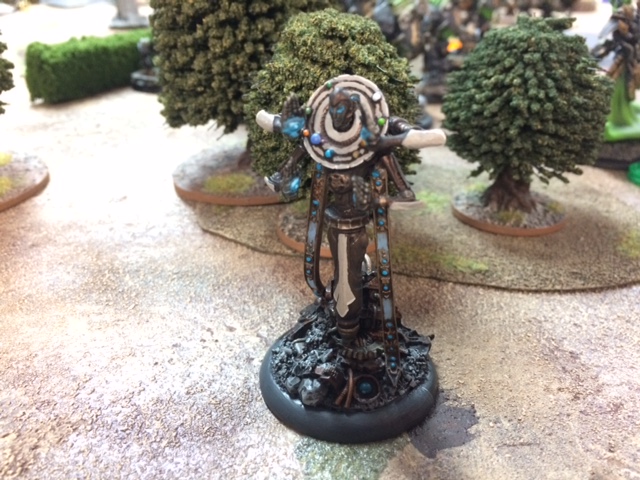 Eminent Configurator Orion. A really fun piece to paint, as the strange solar calendar neck-piece is fun with him. There was lots of “ooh and ah” as opponents refreshed themselves on his rules, as he’s a very recent release. Pretty sure I didn’t represent him as well as one could. Still… happy with the paint job.

A second Assimilator to go with Orion. 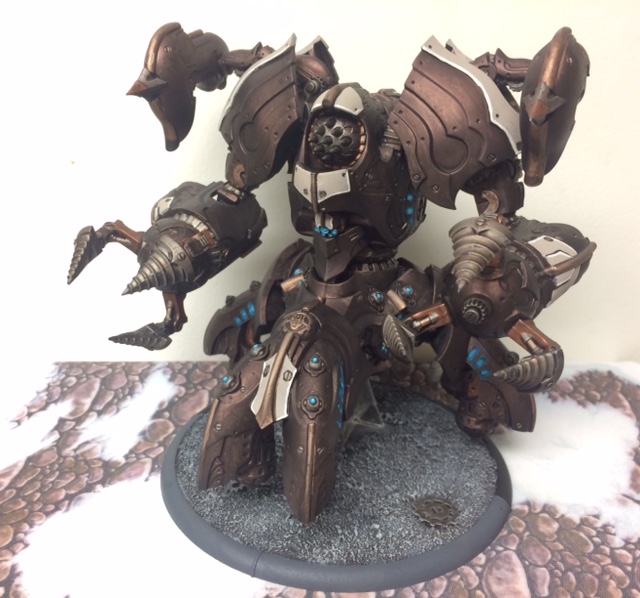 And a Prime Axiom to go with him as well. I actually finished painting him after the first day of play in my hotel room overnight–so you’ll see he doesn’t have his porcelain art deco panels in the pic below.

The ATC itself was a great event and great tournament, and I absolutely intend to return next January if I’m able. I was pleased with how my two lists painted up, and I think I presented a decent question with Lucant and covered his weaknesses with Orion okay.

My two lists, on the tray ready to play before round one!

The place was bustling with people, and one of my regrets was my plan for team T-shirts didn’t pan out. Lots of other teams had them! Gotta plot that for next year. 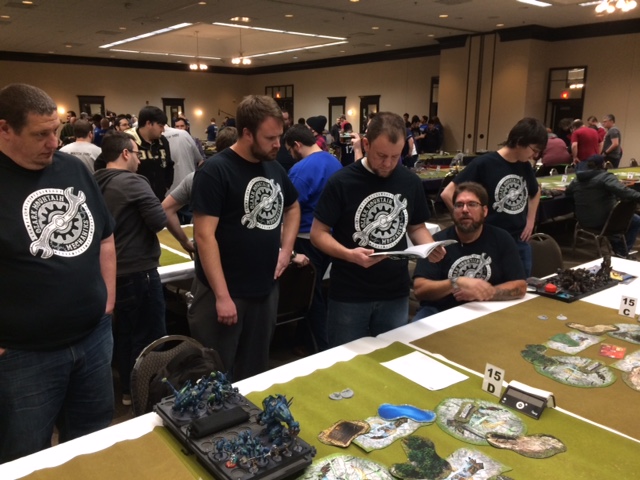 Our first round opponents (from Missouri). This picture shows the set-up of the play and the size of the room. 155 players is a lot of Warmachine games at once!

Team tournament is a great format in many ways, as you get a bit of control (hopefully) over your games, to ideally face things you won’t be blown away by. But not entirely, as the other team is doing the same. 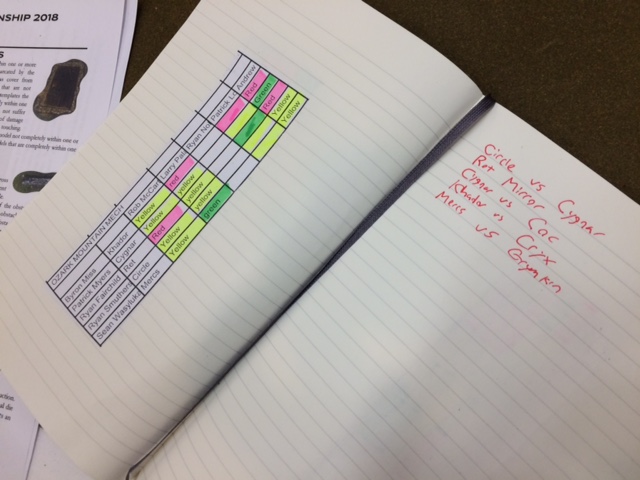 We kept our “matchups book” ready to go thanks to our team captain Rob.

For each opponent/faction we listed Green for confident, Yellow for iffy, and Red for unlikely to win. You’ll see that the Khador and Retribution in this group had things that would be trouble for me, but I was confident into Cygnar. I got lucky and got paired against Cygnar that round (yay!) and won my game (only one of the weekend… /sob). 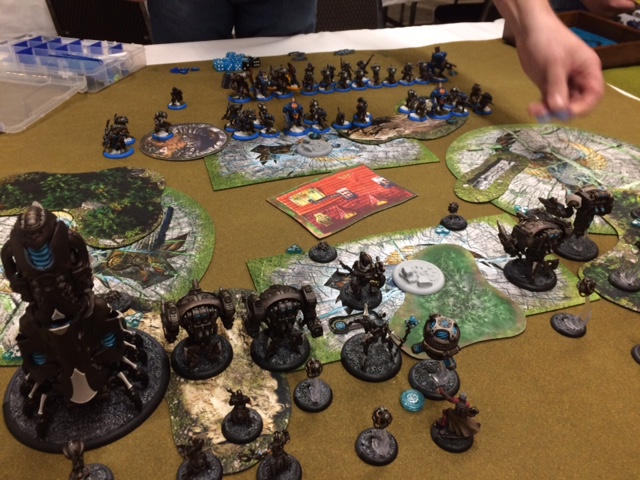 In the pressure of the games, I didn’t remember to take photos of all of them. Here’s game one at least–setting up to attack Cygnar and Haley3. Buildings would be my bane in round 4, but in this round it helped me to have that building in the middle for Lucant to hug up against.

The other game I snapped a shot of was round two: this is right after I went for it against Xerxis1. I could get a line on him from Orion, both Assimilators, and the Prime Axiom. And with my Feat up, I had hoped I could punch through his defenses. Unfortunately, the dice thought differently. 5 or less came up waaaay too often. Alas, can’t blame the distribution too much.

My third round ended in the loss on control point differential vs. Siege2 (run by Brandon of the tournament-winning team). My fourth round was a blowout facing John DeMaris’ Testament. I made a critical mistake with my Prime Axiom, but even if I hadn’t my chances in that game were very slim. And my final game was against Bradigus, and I got caught off guard and found Orion assassinated way too early in the game. I do truly loathe circle and their shenanigans, but I also need to be ready for them even in list construction. That’s one of my three takeaways from the event too–that I need to refine how I’m building lists.

So three big takeaways from the ATC 2018:

I’m looking forward to following up on all three of these going forward. Onward to more gaming, more painting, and more fun!

One thought on “Converging at the ATC”