So I started this week by reading the great new novel set in the Iron Kingdoms: Godless, by Orrin Grey. It tells the story of Sovereign Tristan Durant (Durant2), and it’s a great piece of fiction that focuses on the Protectorate. I got so wrapped up in the story that I thought: I’ve got to paint this model. I had picked him up a long time ago (yay for friends who went to GenCon 2016), so it was good to paint him up to get him onto the table.

Sovereign Tristan Durant. I’m pleased with the look of him, as I am with all of my Protectorate. He’s an intriguing Warcaster, so I was pumped to get him onto the field of battle.

I also finished up Eyriss1 this week, as I needed her for my Kreoss1 that I’m working on. His Feat enables assassinations. If Eyriss1 can then get a shot on the knocked-down Warcaster or Warlock, then it’s surely game over.

First up, I got in a couple of games with Sovereign Tristan Durant to see if I wanted to run him in the upcoming Steamroller tournament.

His first outing as a painted Warcaster was against Ryan’s Cryx and Asphyxious3. In the battle of Warjacks, the fight goes to the squad that can gain souls/focus for Focus spent by models. Tristan got a little too close to Gaspy3, and paid for it with a nasty melee loss. It was certainly a fun game, as Ryan is a great opponent, but Tristan hit the dirt hard. 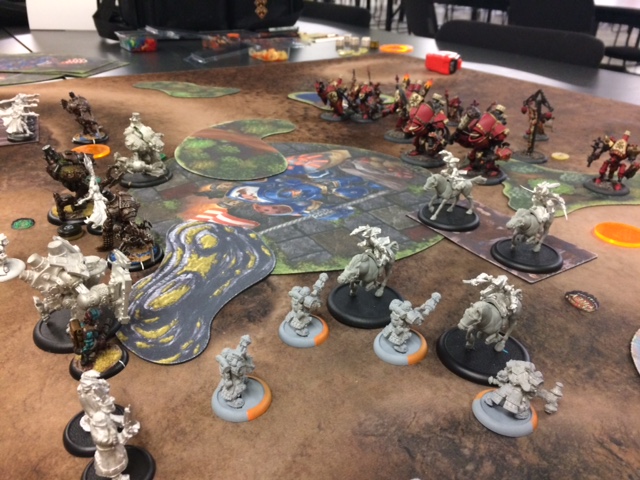 My second test of Tristan Durant2 was against Savage’s Mercenaries led by Fiona the Black. Again, I am blessed to be in a fun meta with such great players. This was a great slug-fest. He finally managed to finish off Tristan with a few shots and a spell from his Warcaster. Was super-fun and I learned a lot about my list. Durant2 can be defensive if he’s camping enough, but he’s still vulnerable in ways as his survivability tends to come from what surrounds him.

These games convinced me that I was nowhere near ready for a tournament with Durant2. I like what he does, but finding a way to not be punished due to the slow speed seems critical. So for the tournament, I took my Kreoss1 list (now with the finished Eyriss1). I planned to play it for most match-ups, except those where I felt like there was some manner of assassination vector. I decided to pair him with Feora2. I like her abilities somewhat, and with the right support she can be definitely defensive. She at least seemed like a good look into infantry lists or lists that would be safe from Kreoss1’s knockdown shenanigans.

So what did I face in all three games? Two lists that were safe from knockdown shenanigans and one that was infantry-heavy. I ended up dropping Feora2 all three games. Which was hardly my plan nor my preferred option. Still, she worked okay in a few matches. I’ll discuss each below in slightly more depth.

First game I was paired against Charles’ Kryssa list. I had to drop Feora2 because I knew he would be taking this option full of battle engines and serpentine models (maybe four models can be knocked down in the whole force?). I bumbled more than a few things in the game and he very effectively picked apart my force. I scared him with a Flame Step assassination attempt, but Feora2 didn’t have the focus nor the dice to finish his Warlock off, and I was crushed in return.

Second game I laughed because I got paired against Savage. His first question: “did you bring Durant2?” Nope! With two lists that carried more muscle than Kreoss1’s list and ways to avoid knockdown in both, it had to be Feora2 again. This one went much the same as the last one, if not even worse. I was jammed into my initial spot and coping with the fast loss of my stuff. All I could do was light most of his force on fire and then watch him take out my models. With pretty much only Feora2 left, I had to use a desperation play–Flame Step and then try to spell Magnus2 to death. Luckily he had left Magnus2 without Focus, spending it to help take out my collossal with Calamity. I managed to hit with the spells and flamethrower, and that spelled the end of Magnus2.

Third game was against Bill’s Cryx army. It was the new Ghost Fleet theme list with Skarre1 as the Warcaster. Because of the numbers and the incorporeal volume, I figured that the Judicator getting magic weapon from the Armory objective would have to be my play. Turned out that I had all the wrong tools except for Feora2. He did a great job dismantling my army. But Feora2 is just hard to kill–and she managed to set up in a spot of danger that still had a threat on Skarre1.

Bill brought his whole force against Feora2, and totally should have killed her. His dice went completely sour on him, which is saying something under Skarre’s dark guidance. Feora2 managed to survive two warjacks and about six ghost pirates. Then it was a simple flame step, charge, and kill Skarre1 in melee.

I ended 2-1 for the Tournament, which I was very pleased about. That record left me in the top half of finishers, which seemed great to me given that I was stuck playing Feora2 in all three matches. All-in-all a good event and a good learning experience with my Protectorate.